I must be doing something right 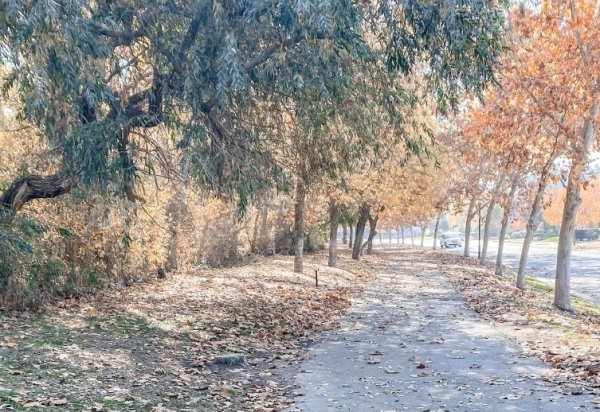 Walk with Me Again
By: Nicole Renee Kent

As I looked at my heart, bare before my God, my friend
I asked Him what areas He desired to be–to touch and mend

He responded, “I want it all and every bit
And for you to use My Word–My heavenly first aid kit

Grasp my hand, dear one, and continue to walk with Me
For I will always be with you and help you to see”

An Ageless Lifetime in a Day
By: Nicole Renee Kent

Would we catch a glimpse of a magnificent ending that is underway
Would we open our hearts now, instead of waiting someday 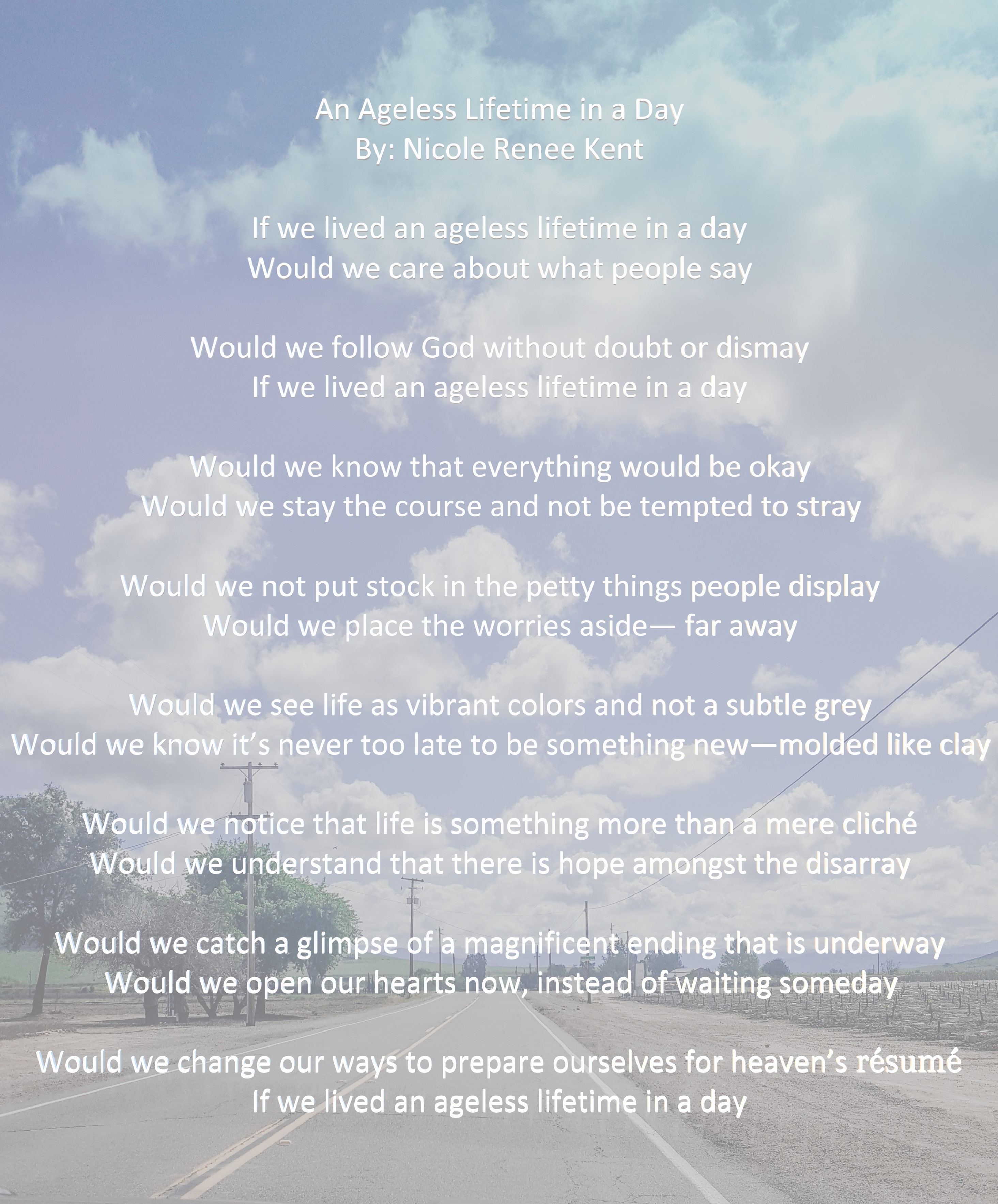 Our Country
By: Nicole Renee Kent

What has our country come to be
Is it still the home the brave—the land of the free?

With basing laws and regulations on how we feel
Are we losing what is moral—what is real?

What is right—what is wrong
Division, strife—will we ever get along?

Have we forgotten to listen to both sides
Using our own brain—thinking for ourselves—no longer letting the falsehoods abide?

Freedom of speech has been choked from what is viewed as wrong
But is that not what thinking for ourselves is—what makes our country strong?

The Sea of Life
By: Nicole Renee Kent (Onthecliffoflife)

There was a girl sailing a boat on the sea called “Life”
When suddenly, the waves became turbulent, pushing her into an unrelenting strife

Suddenly, a voice came softly over the wind
Bringing peace to the water as her broken boat began to mend

“No, no” she said, “I have to be prepared”
She spoke out of fear and utter despair

So, the girl continued on this self-destructing path
Carrying her own burdens and alone, dealing with the sea’s torturous wrath

It finally became too much for her to bare
Finally breaking under the weight of Life, no longer could she plan or prepare

Suddenly, a the voice reappeared
Stronger than before and oh, so near and dear

“Dear one, you were never meant to carry this burden on your own
Let me help you and let My love be ever known

The girl fell into his arms, feeling the weight of Life go
Putting her faith in the Captain and letting His trustworthiness show

Soon the next storm came upon them
But it was no match for her ever-present, knowledgeable captain

No matter what day it was, she made best of it
Going to and from work, singing songs that never seemed to quit

But one day, I noticed tears in her eyes
Attempting to sing- but the sorrow wouldn’t be disguised

I waved at her and tried to make her smile as she once did for me
But her focus was on nothing, heartbreaking-urging her to flee

Soon losing track of her, I continued to drive on
When all-of-a-sudden, the sun made a revelation dawn

•
Do not fear
For God is near
•
Do not be shook
By man’s deprivational look
•
Pick up the truth, the Word
The hope, the healing, where burdens are deferred
•
The desires of your heart He will provide
Under his love you will abide
•
Don’t be afraid my neighbors, my friends
For we know the truth and the forgiving end
•
Open up your Bible and your heart
Knowing it’s not to late to start

Will You Still Love Me?
By: Nicole Kent

Will you still love me with my frizzy hair
With curls galore; going everywhere

Will you still love me with a zit on my face
Big as a fist on my forehead; hard to misplace

Will you still love me when you find out I do not look like the women on TV
Imperfections becoming unfolded…but will you flee?

Will you still love me as I was, am, and will become
The journey will be great if your love is deeper than some

Will you still love me…?

In Valleys, In Hills, In Glorious Mountains

The battles you are fighting are never small
For you must practice climbing hills before mountains so tall
From far away the high cliffs look scary and steep
But as you take the first step, you realize you are no longer weak
Now, it seems more possible to accomplish what you once desired
Facing your fear; walking away from the eternal fire
Strengthen your legs as you follow Him
By starting in the valley and hills that lead to the mountain
Do not feel the failure when you trip and fall
For the One who is with you can and will heal all
The high cliffs are just the beginning of earth’s end
There is yet a greater journey just around the bend
Where sorrow and tears will flow no more
As we stand in front of heaven’s open doors
So, let us start this adventure that is ahead
And follow the One who died for us and freely bled